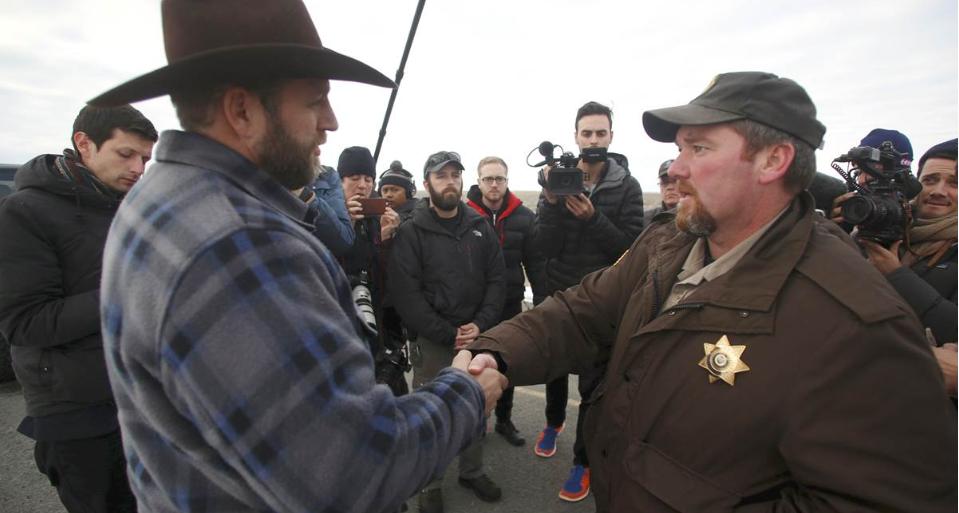 The Oregon Standoff Compared to the battles of Lexington and Concord

There are plenty of articles discussing the shooting in Oregon. People are asking questions like, “If the shooting was justified, why were there no dashcams or shoulder cameras with audio being shared?” Or, “If LaVoy had the intent to fire upon officers of the law, why did he leave the safety of his vehicle and allow himself to be surrounded?”

Many are trying to answer these questions, but the real questions on everyone’s mind are, “What’s next? Will we have to turn our ballots into bullets? Do we need to get involved in this?”

There are voices that speak of a revolution in America. Whispers speak of the next Revolutionary War. Before we pull out our modern muskets, however, some vital differences between our time and the era of our forefathers need to be considered.

Most people are familiar with “the shot heard ‘round the world,” which began the battles of Lexington and Concord. To this day, no one knows who fired that first shot of the Revolutionary War which ultimately led to our independence. Was it the Redcoats? The Colonials? We will likely never know.

The news media has been guilty of referring to the police action in Oregon as a “gunfight.” However, like a battle, a gunfight requires an exchange of fire from two parties. There wasn’t one. It was a one sided fight, and that’s not a good thing, we can actually conclude that it was a great thing! The fact that the protesters didn’t fire a shot gives immense power, validity, and innocence to their cause. It gives them the moral high ground in every way.

Their actions say, “We are willing to fight and die for our beliefs, but we believe in a better way. We believe in this country. We believe that America is good, that her people are good, and that they will come to right the injustices, and take back the power of liberty.”

The one-sided exchange of fire is a testament that these protesters want to accomplish their goals peacefully  This, in fact, is the entire purpose of the original Constitution of the United States. As stated in the Preamble, the Constitution was designed to maintain peace and balance between the Federal Government, the States, and the People.

After the battle at Lexington and Concord, the cry of revolution rang out long and loud. Farmers picked up their hunting rifles, loyalists contended sharply with the so-called  “traitors” who dared betray their king, and thousands of people in between wondered what to do. Reports must have been flying throughout the Colonies at the equivalent speed of a viral video. Some defended the authority of the Crown while others spoke of grievances, angered by the number of times the national government broke national laws. Thomas Jefferson went as far as to list these abuses in arguably the most epic breakup letter of all time: The Declaration of Independence.

It was a message to King George:  “We have been patient long enough.  You have overstepped your bounds, and we are willing to defend our rights and liberties as a new free nation!”  Out of the bloodshed and anarchy that followed, many of our Founding Fathers sacrificed their lives, their fortunes and their sacred honor to procure our liberty.

The difference between then and now is that the Founders set up the government to avoid a similar war if at all possible. They did it for us, and it is still there! It may be buried, but liberty is still burning bright in the hearts of modern Americans. Even though the principles of our Constitution are nearly forgotten, they are not lost! And so this is the difference:  We already have in place “the greatest piece of work ever struck off at a given time by the brain and purpose of man.”  (William E. Gladstone)   Sir John A. Macdonald, the first prime minister of Canada, said, “I think and believe that it [the Constitution] is one of the most perfect organizations that ever governed a free people.”

Americans are beginning to wake up.  We the People are wanting to peacefully resolve the same federal government abuses that King George placed on the colonists so long ago.  Yes, the protesters brought their firearms. They have that right, as we all do. In fact, the entire purpose of the Second Amendment is to ensure that the rest of the Amendments in the Bill of Rights are honored. They had their firearms, but they very loudly did not use them.

If the protesters in Oregon wanted a fight they would have fired. If they wanted a battle, LaVoy would be their martyr, and the arrest of the Bundys would have been a call to war.

We would have seen a Lexington and Concord.  But we didn’t.

Consider this declaration of the daughter of the late LaVoy Finicum:

The statement of LaVoy Finicum’s daughter is vital in understanding this man, because he raised her. He taught and inspired her life, as any good father should. The message of LaVoy’s life is love. The message of his death is peace. Not only justice, and not liberty alone.

It seems that the Bundys and the Finicums know that the way we get back to the laws and principles of the Constitution matters just as much as the method we use to get there. We still have the opportunity to use ballots and our right of peaceful assembly, as stated in the Bill of Rights.  Bullets and riots were the necessities in 1776.  God willing — this method of change doesn’t apply now.

The news media can be depressing. Being active in politics can be daunting and often may seem hopeless.

As we turn our lives to Him as a nation, as we fight the waves of evil pounding on us from every side, as we have courage like Jefferson, Madison, Finicum, and others, we will have the power of God on our side, and in the end freedom will be victorious, and gratitude will be our anthem.

“If my people, which are called by my name, shall humble themselves, and pray, and seek my face, and turn from their wicked ways; then will I hear from heaven, and will forgive their sin, and will heal their land.:  (2 Chronicles 7:14)